Another stop for this day was the Medieval Times dinner theater. also in Schaumberg, Illinois. Actually, Michael and I sat this one out, but Lisa and Caitlin had a great time! 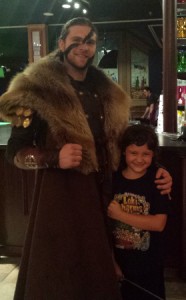 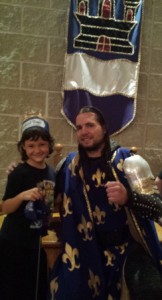 While I stayed home for this one, I have attended this theater before, and I remember it being a load of fun. Sometimes the camp and corn factor goes through the thatch roof, but that’s half the fun. Apparently this theater has several rotating stories, so each time you attend you’ll get a different show. That was news to me, but after thinking about it, that makes perfect sense. If nothing else, the performers would get sick of doing the same show over and over again! I suspect it’s something akin to summer stock theater, at least in terms of business operations. 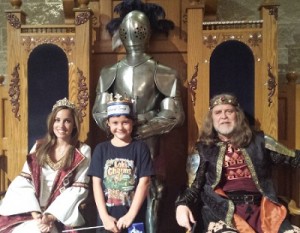 Michael doesn’t do well in dark, noisy places like movie theaters. We figured that attending a dinner theater with clashing swords and galloping horses would be asking for trouble. So, he and I stayed home and played with his new Duplos.

Next: Fish in the Shedd