This Christmas, the Pugh’s of Culpeper did something different: we took a 15-day road trip that I jokingly named Operation Arapaima. I chose that silly name because (a) Caitlin really likes those big fish, and we expect to visit an aquariums along the way, so we’ll probably see one. Also (b), I’m poking fun at military and government operations that have strange names which make little or no sense. In hindsight it might have made more sense to call this Operation Mud-skipper, given how the trip has been broken into a series of short jumps. At any rate, the ultimate destination is the home of Lisa’s parents in Hammond, Louisiana. Her two sisters and their families live in that same general area. We’re doing this trip for three reasons.

First, we were unable to visit with Lisa’s family during the summer. Most summers, my in-laws rent a beach house somewhere on the Gulf coast, usually Gulf Shores, Alabama, and we visit them there. We were all set to go again this past summer, until someone slammed their S.U.V into the side of our house! That sent just about every summer plan we had straight to the compost heap, so we arranged to do this instead. Actually, even this trip came close to being scrubbed, just a few days before we were set to start. I’ll talk about that somewhere else.

Second, back in the spring we bought a Prius-V, which gets amazing gas mileage for a car its size. Normally we would fly a distance like this, but airplane tickets are prohibitively expensive these days, especially around the holidays. But with this nice new car, driving is actually a viable option.

Dr. Watson will be spending the holiday at a pet spa in Rapidan, Virginia. That’s not a bad deal for him, actually. 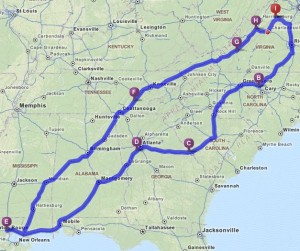 Mind you, I started to feel differently on the third day of travel. When I was younger, family trips were always done by car. Using a plane or train was never seriously considered. So in some ways I’m accustomed to long car trips like this. But I didn’t always like them. I really don’t like to fly, but I’m pragmatic enough to know that for some destinations, and when time is a pressing issue, flying is the only real option. But if another method if available, I’ll look into it. Truth be told, my favored means of long distance travel is rail. But this time, the train timetables just didn’t co-operate with our travel windows.

Lisa wasn’t very taken with the idea, but seems OK with it as a one-time thing. She generally prefers to fly, and whenever we plan a long trip, flying is her go-to method. We’ll see how this driving thing goes. At first the kids were fine with the long car ride. But after two days of almost non-stop driving, the third day of driving (from Atlanta to Hammond) couldn’t end soon enough.

If there is one advantage to driving, it’s the ability to have a flexible timetable. That has allowed us to include some stops along the way, to places and people we normally wouldn’t get a chance to see. At present, the itinerary looks something like this:

This was the original itinerary, but this isn’t how it turned out. A few days before we left I was informed that my mother was very sick, and that it was the kind of sick you don’t recover from. The trip was almost cancelled, but we went anyway, with the proviso that if I needed to return home before the scheduled end of the trip I would. Sadly, that is exactly what happened.