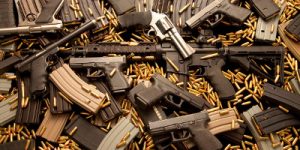 It’s official. I am sick and tired of guns.

I’ve talked about the Second Amendment before. It has been taken out of context for a very long time, the prevailing legal interpretation of it needs to be re-evaluated, and the bylaws related to it need to be updated. However, the social and political climate of this country is such that such changes aren’t likely to happen. (Well, at least it was unlikely until the past week or so.) I have had my fill of news stories describing mass shootings in various places around the country, and the apparent unwillingness of the government to really do anything about it.

In an earlier essay I described what I called the “price of freedom” for gun ownership. The second amendment clearly states that citizens have the right to carry weapons for self protection. Fine and good, says I. But that right comes with a price. If a nation is going to allow easy access to guns, and place few if any restrictions on the types of guns that can be acquired, then that nation is going to have problems related to gun owners. In the case of the United States, those problems have recently included people going on a rampage and killing people at random. The most recent of those victims were school children.

It’s a very simple equation, as far as I am concerned. Loose gun laws will bring about random acts of mass violence. That is the “price of freedom” related to gun ownership. I was intrigued to discover that I am not the only person who sees it this way. In fact, one of those people is political commentator Bill O’Riley. After the mass shooting at a music festival in Las Vegas last fall, he wrote about it on his blog, and it was in turn carried elsewhere. He also makes valid points about how polarizing the issue of gun control is, and that any real progress is unlikely as a result. He also seems to be of the belief that the rights guaranteed by the second amendment are so important as to be almost sacred, and that we need to simply accept mass shootings as part of everyday life. A lot of people, especially the NRA and their supporters, seem to believe that.

I, for one, do not. I can see the logic behind the argument, but I do not accept it. For starters, I can’t accept the “reasons” for gun ownership that are championed by the NRA and its supporters. Most of those arguments boil down to fear of the government. Granted, this was a legitimate concern for the founders of this country, because the European powers were eying the young United States the same way vultures eye a sick animal. Today, fear of a foreign invasion has diminished, but fear of an oppressive government is alive and well. Conservatives seem to think that the only form of oppressive government is a Liberal one, while Liberals fear a Conservative one. (Currently, given the historical pattern that President Trump is following, I think the Liberals are justified. But that’s another issue.) Personally, I believe that if the government is turning oppressive, it’s because we as a nation haven’t been using the tools we have to keep it under control. If you don’t like the direction a government is going, then vote for different leaders. And if they don’t improve the situation, then vote for a different group. And keep voting until we have a bunch of leaders who can “do it right.” If things get to the point where the government starts sending agents to people’s homes to confiscate their guns (or anything else), then it’s too late. Ownership of a gun, even a powerful one like a Colt AR-15, will only hold them off for a short time.

I could ramble on about the NRA, especially now that many people are labeling it a terrorist organization. But I don’t want to go down a road that others have already paved. I don’t have that kind of stamina tonight. I’ll let others make this point:

Over the past two weeks several corporations have started severing ties with the NRA, because they have become so controversial. Some of these corporations, including Delta Airlines, are facing legal retaliation by Conservative lawmakers, who see this as a violation of the free market. I must be missing something here, because that sounds more like pettiness than concern for the market.

Whenever there is a mass shooting, or some other gun-related tragedy, we hear all kinds of people offering up their “thoughts and prayers.” A lot of people are enraged over this, and are claiming that thoughts and prayers aren’t helping. I don’t entirely agree with that, because prayer can be a very powerful force. But, it works best in conjunction with other methods, and it can be an effective way to galvanize people. So don’t write it off entirely.

In the case of gun control, and speaking only for myself, I have given the issue a lot of thought, and I’ve even prayed about it. My thought process has concluded that we need tighter gun laws, and that doing so will answer a large number of prayers.

I’ll end this disjointed rant by mentioning the school protests that are taking place around the country. Many of them are school children, not unlike the ones who were caught in the massacre in Parkland, Florida. They are making it clear to lawmakers that they do not feel safe, and that they demand changes. This has been a dividing issue in the United States for several years, but thus far the lawmakers have lacked the will to do anything about it. I suspect there is more demand for tighter gun control than the gun proponents realize. This “student uprising” is a good indicator of that. These same school children will be of voting age within a decade. I strongly suspect that we start seeing stronger gun laws by that time, if not sooner.

To close this out, here are two other interesting takes on this sordid topic.

Perhaps the price of freedom, at least this particular freedom, has gotten too high.