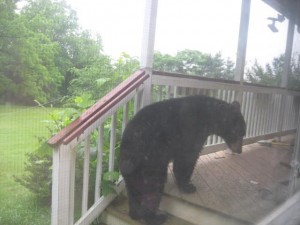 It’s flashback time! This is something I shared on Facebook, back in May of 2012, about a strange visitor to our rural Virginia home.

On Friday, May 24, 2012, at about 10:25am, Lisa was rousted from her writing by the frantic activity of our border collie, Doctor Watson. Our front porch was being raided by an American black bear! Apparently the bear was searching for food, and found the contents of our bird feeders a tasty snack. Both bird feeders were totally destroyed by the determined ursoid. This is unfortunate, because one of the feeders had been one of Caitlin’s school projects! The bear wandered around the porch for a while, leaving a swath of destruction in his wake, until not a single sunflower seed remained. He then sauntered on his way. 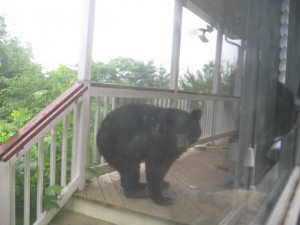 Lisa took these pictures from the relative safety of the house. This animal had no interest in entering the house. Fortunately. Grizzlies will break into houses, but less so black bears. I suspect that had this bear entered the house, Doctor Watson would have put up quite a fight. And would have lost. That evening I removed any potential food sources from the porch, while Lisa called the neighbors and informed them about the visiting forager. The neighbors weren’t happy to hear about this, but they too removed or secured possible food sources from their porches. 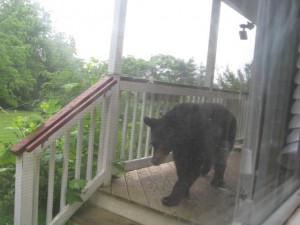 The bear did come back the next day, which is when Caitlin and I got a chance to see it. He looked around again, but found nothing to hold his interest. We didn’t see him again after that second day. One of the neighbors saw him later that week, but only in passing. 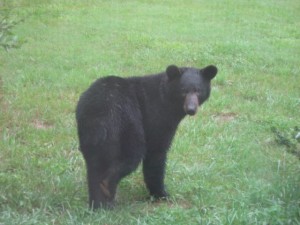 He was actually a very handsome animal, all things considered. Caitlin told her classmates about the bear, but many of them didn’t believe her. At least not until she brought in some prints of these photos.

The first time I saw a wild bear was as a boy scout in the late 1970’s, and that bear was almost a quarter mile away. When dealing with bears, the Virginia department of game and fisheries advises residents to make sure that no food sources are out in the open. If a roving bear can’t find food, it will move on. And if a given area doesn’t have interesting food sources, a bear will move to another area. If a bear persists, then it’s time to call Fish & Wildlife. In Virginia, nuisance bears usually end up being tranquilized, tagged, and relocated to the Shenandoah National Forest. We suspect this particular animal eventually moved on to one of the nearby forests, because we haven’t seen him since.

The American black bear is the most common bear in North America. The Eurasian brown bear is it’s closest cousin.