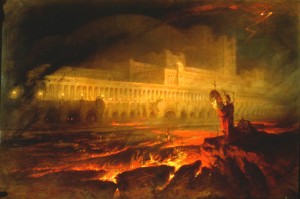 My old blog, Peppers, used to have a category called Pandemonium, and I have carried it over to this one. It was a category I used for social and political commentary on the world around me, or at least my perception of it. Someone once asked me why I chose the word Pandemonium. That’s a two part story. Allow me to tell it to you.

First, let’s look at how Merriam and Webster define the word:

Since I’m talking about this world and not the afterlife, I’m ultimately referring to the third definition: a loud, tumultuous ocean of noise. But not entirely, which brings me to the first part of my story.

Rewind to the late 1980’s when I was a student at St. Bonaventure University. I had been taking some theology and philosophy courses (which at the time were a University requirement) that included the writings and polemics of the Trappist monk, Thomas Merton. Merton wrote several books of short essays and commentaries about contemporary topics. Most of his writings had a tongue-in-cheek wit about them. But others were acidic and sarcastic, and a few were downright vicious. In fact, he was ultimately silenced on certain topics, because his more venomous writings got his order into some hot water!

Anyway, I was discussing these writings with some friends one night, and we all wondered if we were to each write a similar book, what would it be like? As that conversation turned, I came up a list of topics I would have ranted about. Most of the topics tended to be the unpleasant, controversial, uncomfortable things that no one likes to talk about, but that ultimately everyone must. And when they are discussed, the scene often degenerates into a loud, disjointed fight. One of my friends (who, like Thomas Merton, has since taken a monastic vocation) suggested that I name my book “Cacophony,” or that I use that word in the title, in reference to this noise.

I was thinking on this idea until a literature class, when the professor was talking about John Milton’s classic, Paradise Lost. There is a passage where the narrator describes the capital city of Hell, and he makes frequent references to the constant noise. One speaker would start yelling louder than whoever happened to be speaking, seemingly with the aim of forcing the listener to hear their statements and be forced to ignore the former. Then another speaker would come in and attempt to drown out the original two. Then a fourth speaking would come in do the same. Meanwhile the first speaker has increased their volume to compete with the other three, and so on. After a while, the noise level of so many voices demanding the undivided attention of everyone, at all times, becomes a mass of sound so large than one can no longer hear themselves think. I found that metaphor rather fitting for so much of modern life, so from cacophony I shifted to a title that evoked less of a condition and more of a place.

I never wrote that book. In all seriousness I never expected to. I did other things instead. But throughout my adult life I’ve often found “Pandemonium” to be a poetic descriptor for the constant barrage of noise that modern life subjects us too.

The second part of this story begins a few years ago, when I was setting up my first blog. I once again I found myself wanting to write about cultural, social, and political topics that just annoyed the heck out of me. The noise level that I experienced in the late 1980’s has not subsided. In fact, with the advent of the Internet, it’s gotten considerably worse. I’ve gotten better at filtering it out, and some topics don’t rile me up the way they used to. (Though to be fair, some topics now rile me far more.) But make no mistake: that disgustingly naive 20-year old was still inside me, seething away. And the title of his never-written book (or perhaps not-yet-written book) surfaced anew.

Someone else recently asked me why I’m still maintaining a web site, given that I find the Internet to be largely a noise box that puts television to shame. That’s hard to answer, but I guess one reason is that I’m doing this for myself. This is a means by which I may be able to get my little piece of noise written down, as my personal foil or counterpoint to a lot of the stuff I have thrown at me each day. In all honestly, I didn’t expect many people to read this, but I’m delighted to know that a few people are. (Thanks for visiting!)

Another reason I’m writing this is far more pragmatic. I’m an aspiring writer, and I need to practice my craft. This is one of the ways I have chosen to do that. Who knows, one day I may actually get something published. Perhaps it will be a set of commentaries about the modern world?

So to answer the question as to why I use such an esoteric and pedantic word, I’ll put it this way:

Sometimes I watch the news, traverse the Internet, or listen to the radio, and I’m subjected to a constant barrage of noise. Noise from people or companies I have no desire to talk to, all doing everything in their power to capture every piece of my attention for the few precious moments they need to sell me their questionable products. I hear noise from political and media demagogues who insist that I get in line behind their chosen idol and never want to consider another opinion again. I hear noise from people from many walks of life who want me to subscribe to their point of view. They don’t want me to form my own opinions based on my own experiences, observations or needs, they want me to blindly follow them like a sickened sheep. They – the noise makers – don’t want me to think for myself, they want to do my thinking for me. What’s worse, as soon as I manage to pull away and block out their clamoring, there are at least two more trying to do the same thing. And the cycle continues, over and over. I am hearing the endless cacophony of unwanted voices echoing off the flame-scorched streets of John Milton’s city of the damned: Pandemonium.