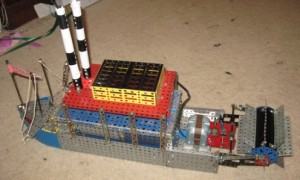 Old man river, that old man river,
He must know something, but don’t say nothing.
He just keeps rolling, he keeps on rolling along.

This article first appeared on one of my earlier blogs, on January 1, 2013.

This entry deals with a staple of American West, the stern-wheel, flat bottomed river boat. These boats were first developed for use on the Mississippi River, which is how they got their name. They had a shallow keel, which allowed them to be operated in very shallow water, and their wide base made them surprisingly stable in the churning waters of the Mississippi River. One of these boats was the setting for the famous musical play, Show Boat.

Actually, these boats were not restricted to the Mississippi. In the old West, the large ones could also be found on the Missouri River as far west as Mandan (near Bismarck), North Dakota. Smaller ones operated as far west as Fort Benton, Montana, and along parts of the Platte River in Nebraska. Further east, these flat bottom steamers could be found on the Ohio River, especially in and around the industrial areas of Pittsburgh, Cincinnati and Louisville. This style of boat also made a historical mark in the shallow inlets of British Columbia, and the Red River of Manitoba. Today, these boats can still be found offering tours and dinner cruises. My wife and I once spent an afternoon aboard the Natchez, which is a flat bottom steamer that operates in and around New Orleans. For my model, I attempted to emulate a famous model by Marklin. The plans for this model have been successfully recreated using Meccano, so I figured an Erector conversion would be straightforward. And you know what? I was wrong! 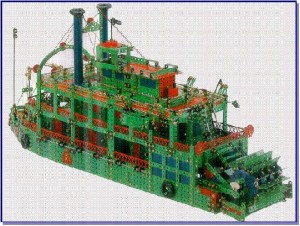 The level of detail in the original Marklin model is astounding, and I really wanted to re-create this using Erector. However, the sheer variety of parts was more than I had anticipated. During the construction of this model I found a set of instructions for the Marklin original, and discovered that I was way off the mark on several key points. I considered starting over, but opted instead to finish it using what I had. The result isn’t as impressive at the Marklin model, or even the Meccano recreation, but it’s still clearly a riverboat.

My model uses an even mix of Class-II and Class-III parts, with a handful of “5 in 1” parts thrown in for good measure. The distinctive smoke stacks are simply rolls of card stock paper held in position with W stacks. The paddle-wheel is made from a T boiler, connected to an axle using hubbed CR turret plates, and using ME base plates for paddle blades. The paddle-wheel is powered by an A49 motor, which is attached to a set of strips connected to AA eccentric cranks. The paddle-wheel works well once it gets started, but stalls and jams are frequent on start-up. It’s my understanding that stalls and jams were common on real steamboats as well and probably for the same reason. If the two drive shafts aren’t balanced correctly, they start turning the paddle-wheel in opposite directions! 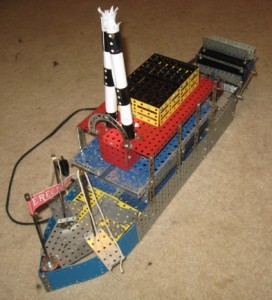 My daughter enjoyed playing with the completed model, and it was fun to build, even if a bit frustrating. I estimate total construction time at around five hours, in intervals spread over three days.

I have not given up my aspirations of re-creating the Marklin model using Erector. Now that I have the complete plans available, I can be more accurate in my part selection and arrangement. Some of the parts used by the Marklin model don’t have an Erector counterpart, which leaves me three options: I can make custom parts, I can make an approximation using available parts, or, I can outrage the purist collectors by adding some Marklin or Meccano parts to my working set. If and when I attempt this model again, I will make a decision at that time.