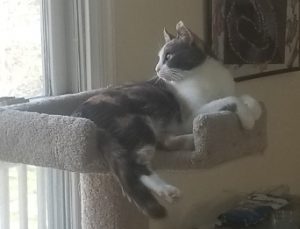 In the weeks following Michael’s death, the house seemed oddly empty. So after a time we decided to start searching for a new pet.  One of our counselors even suggested getting a pet as part of the healing process, especially for Caitlin.

We started looking at the local shelters and animal rescue centers to see what they had to offer. Initially we looked for a dog, but weren’t able to find a suitable one. Regulations for adopting a dog can be very rigid in this area, and misunderstandings seemed to be common.

So we expanded our search to include cats. I have always considered myself a dog person, but I have no real issues with cats. Especially since my cat allergy reduced. For me it really depends on the character of the cat. Some cats are insufferably aloof, even snooty. But others are great company. Both of the cats I have lived with had good personalities. Catfael was a very reserved girl, and was often suspicious of people.  She and I had a rocky start, but eventually became good friends. Nigel was a very outgoing cat to most everyone he met. He was very fond of Caitlin, and enjoyed hanging out with people.

So for me, the primary criteria for a cat was the character of the animal. That and it had to be a short hair. I still have a cat allergy, but it only seems to come out around the long hair varieties, like Himalayans or Persians. I suspect living with Catfael and Nigel gave me some resistance.

There was another criteria we had: Caitlin wanted a calico (if possible). One of her favorite programs is an anime called Bungo Stray Dogs, which is a metahuman adventure serial with a decidedly art deco appearance and film noir story style. It’s actually quite good, though it takes time to get into, given the complex backstory. Anyway, there is a calico cat that figures prominently in the setting, and his name is Natsume. Most of the characters in the show are named for writers, including Natsume.

In early December we learned of three calico cats that were up for adoption in nearby Orange county. So Lisa and I went to look at them. All three of them had good personalities and could have worked out. But one in particular stood out. Remember how I said I have always considered myself a dog person? Well one petite girl just mobbed me! She was purring like a motorboat and snuggling like she had never been petted in her entire life. I actually had to work at keeping her tail away from my eyes (the allergy thing again). Then she went over to Lisa and started doing the same stuff. I’ve been told that the pet chooses the master just as much as the master chooses the pet. As with Watson, it was clear that this petite calico had made her choice.

Just to be sure, we went back later that day with Caitlin. Not surprisingly, the cat approved of Caitlin with the same gusto she had shown Lisa and I earlier. We adopted her then and there, and by late afternoon she was at her new home, and sporting her new name, Natsume.

She was reported to be four years old, which we doubted given her small size. However, after a steady diet she put on weight and now falls into the normal weight range for an American short-hair. She lived with other cats, and we think she was bullied by larger ones (including, apparently, her own brother). According to the shelter report, she was surrendered because her owner could no longer care for her. We suspect an older person who moved into a nursing home and couldn’t bring their cats.

We sometimes call her Natsume of the Funky Ear, because one her ears sports an odd curl. We understand this is the result of a sunburn from when she was a kitten.  One of her favorite activities is attacking piles of laundry, and batting at my boot laces when I get ready for work in the morning.

When we adopted her, we weren’t thinking in terms of a therapy animal. But in many ways she has become one. Her cheerful sounding meow, frequent purring, and regular snuggling have had a very positive impact on the atmosphere of the house. She will never replace Michael, obviously. But her calm, quiet yet cheerful presence has eased some of the pain of loss.  I am very glad we adopted her, and I hope she is able to live with us for many years to come.

Regarding the writer for whom she is named, Natsume Sōseki, he was a novelist who was active in the late 19th and early 20th century. He spent two years in England, and many of his works were inspired from his time there. Which is strange, because he absolutely hated the place.

One of his most famous works, if not his most famous, is a satire called I am a cat. In this, he made comments on the behavior of certain high society types of 1905-era Japan, but from the perspective of a house cat. I understand it can be dark and biting, but also very funny. It has been compared to a political cartoon, biting newspaper editorial, or even a sarcastic monologue from late night television. I have not yet read his material, and I understand that it doesn’t translate very well. Satire often doesn’t. But even so, I am a cat is on my to-read list. 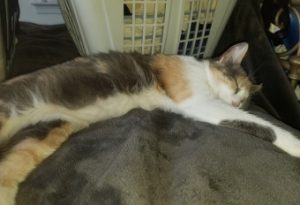