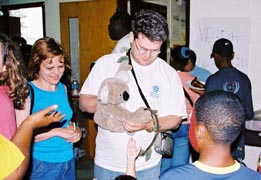 Many people who know me personally are aware of my large collection of puppets, and that puppetry is one of my hobbies. This article is based on a page that I used to host at my old web site, and it talks about this fun, and often furry pass time.

I started collecting puppets almost on a lark, back in 1994. When I was in college, one of the campus friars had an extensive collection of animal puppets. He used them for children’s ministry, prison outreach and as props during his often very whimsical sermons. My friends and I used to have a lot of fun just hanging out in the student lounge playing with the puppets… usually on Sunday afternoon when we were nursing our hangovers brought on by the previous day’s activities. My personal favorite was a ground squirrel that the friar had named “Sara.”

Fast-forward a few years to when I was working at Cornell University. For a city it’s size (about 30,000 people), Ithaca has some very eclectic offerings, including (at the time) a store that specialized in plush animals and hand puppets. One day while on my lunch hour, I saw a squirrel puppet that looked almost exactly like my old favorite "Sara," so I picked it up for sentimental reasons. As the months rolled on, I ended up getting more animal puppets, and before long I had a good collection.

For many years I lived in the Washington, DC area, and there is a store in Alexandria, Virginia, that carries many of the same puppet lines as my old haunt in Ithaca. Sadly, the store I used to visit in Ithaca is no longer there.

Most of my puppets are from the Folkmanis company. They are very lifelike in appearance, and are easy to operate. Some Folkmanis puppets are too small for me to use, but I may eventually add them to my collection anyway. By the same token, some of their puppets are quite large, and seem to be designed with an adult in mind. Other companies also make large animal puppets; one company makes a French-lop rabbit puppet that is roughly life size!

During my time with the public library, I considered getting involved with the children’s library programs, using my puppets. Unfortunately, I was never able to find the time, but I may look into that again at some point in the future. Puppets are great for entertaining children, and they are a perfect vehicle for telling stories. Folkmanis even has a list of books that work well with puppets.

As an aspiring writer, one of the areas I have investigated is children’s literature. Furry creatures are often popular with children (just look at all the cartoon characters that are furry animals) and I have some ideas for a cast of “furies” based in Washington, DC. I may turn these ideas into children’s plays that can be performed using puppets.

This list used to be longer, but web rot is a nasty thing.

I encourage any puppet masters out there to comment on this article, or contact me about useful resources in the wonderful world of puppets.