There has been a lot of talk about symbols recently. The flag of the Confederate States of America has been one, as have some other symbols and icons of the Civil War era of American history. A lot of people love and cherish these symbols. The reasons vary from one individual to the next, and some of those reasons make sense. Others reasons make no sense at all, at least not to me. But regardless, for every person who loves and cherishes these symbols, there is at least one person somewhere who abhors them and would like to see them vanish from the collective memory. Sooner or later, there is going to be a conflict of interest. Where do I stand on this? Well, in order to answer that, I need to draw a parallel. (Come on, you didn’t really expect me to give a short and sweet answer, did you?) I suspect the first thing that came to your mind was Nazi Germany, with it’s legacy of racism, hate, and mass murder. Considering the stain on human history created by that regime, you would be perfectly justified in doing so.

But you know what? That’s not a Nazi swastika (sometimes called a hakenkreuz). It’s a swastika, yes, but it’s an ancient Sanskrit one, often called a gammadion cross. It figures in the religious writings and illustrations of Hinduism, Buddhism, and Jainism. The symbol represents the cyclical nature of life and the universe, and was generally used to represent good luck and prosperity. In many parts of south Asia, it still does. In the West, the swastika was a largely benign, or at least neutral symbol, until the rise of Nazi Germany. The generally positive concepts related to the Sanskrit swastika were known to the Judaeo-Christian traditions, and were generally taken at face value.

Nazi Germany changed that. The totalitarian nature of the Nazi regime, and the devastation it caused, are well documented. When the Nazi’s came to power, Wiemar Germany was a mess. One of the reasons they came to power was their promise to “make Germany great again,” and the average German citizen was desperate enough, or despondent enough, to believe them. I personally believe that the Nazi’s chose the swastika because of it’s associations with good luck and prosperity. The only real change they made to the symbol was reverse the direction of the arms, so that the symbol appears to be rotating in a clockwise direction as opposed to counter-clockwise. I suspect that change was just a Western convention. Things rotating in a clockwise direction just “look right” to a Western audience. 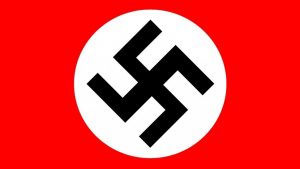 But regardless of the changes, and their reasons for selecting it, the ancient Sanskrit symbol for good luck and prosperity, the swastika, was co-opted by an evil regime. And today, at least in the West, the symbol is inexorably linked to the Nazis. So much so that even if someone displays the gammodion cross within it’s original context, they are likely to be labeled a Nazi, or at least some form of racial supremacist. So deep is this reaction, that there are theologians and anthropologists who wonder if the ancient symbol will ever be acceptable again. 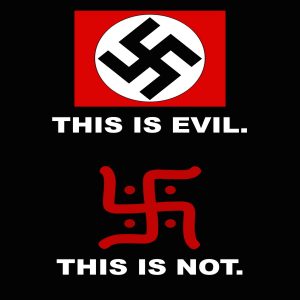 The swastika had been in use as a symbol of good luck for at least 2,000 years. But after a mere twelve years as the symbol of Nazi Germany, it became a symbol of racism and hatred. Symbols can be tricky things to work with, because perceptions can change or be changed. How does this relate to the various Confederate symbols that are currently under scrutiny?

For a long time, flags of the Confederate States of America have been used a symbols of southern pride, and are (at least theoretically) cultural symbols rather than political ones. The most common Confederate flag in use today is the “Navy Jack:”

This flag has some nasty connotations with it, and even the Confederate Congress was unsure about it. According to an editorial by newspaper editor William Tappan Thompson, the white field was intended to symbolize the racial superiority of whites over all other races. As a result, this flag became nicknamed the “white man’s flag.” Needless to say, this one quickly became of flash point for controversy.

This flag was eventually phased out because it was often mistaken for a truce flag. The Navy Jack is the flag that most people associate with the Confederacy today, even though it was technically a battle flag. According to Snopes, the Navy Jack shouldn’t be a problem for this very reason, and as a symbol of southern culture it should be acceptable.

The Navy Jack, along with many other symbols related to the Confederacy, has acquired a very negative connotation, especially in the African-American community. The flag has been associated with various branches of the Ku Klux Klan and other racially motivated hate groups. In the late 1940’s and early 1950’s, it was associated with the “Dixiecrat” movement, which promoted racial segregation and several of the infamous “Jim Crow” laws. Today it is often associated with any number of white supremacist groups. So it doesn’t matter that the Navy Jack was a battle flag and didn’t stand for anything political. What does matter is that it is a flag associated with the Confederate States of America, and the social evils that it stood for. Sports journalist Steven A. Smith summed it up nicely when he said the Navy Jack has come to represent a dark and offensive period in American history.

For years historians of many persuasions have attested that the American Civil War wasn’t about slavery, but about Federal authority and state’s rights. For me, that never rang true, even when I was in primary school. I understood the words and I could see the logic, so I went along with it because I wanted a good grade on the final exam. But slavery was a fundamental and necessary characteristic of the Confederacy. It was so pervasive that it simply cannot be ignored. So when my teachers said that the Civil War wasn’t over slavery, I couldn’t accept it.

The Confederate States of America have been romanticized to the point of absurdity, especially in the southern states. It was essentially a feudal system, where manor lords exercised control over their lands, and where the national political structure was a strict hierarchical chain based on property ownership (which included slaves) and social standing. This type of political structure had fallen out of use almost three centuries earlier, at least in Europe, so attempting to implement it in 1860’s North America seems rather silly in hindsight. It was an anachronism from the very start. And for most people who actually lived in the Confederacy, it was probably a very harsh life. (Actually, in those days so was life in the North, but for different reasons.)

A very important point to remember is that feudal systems require some type of slave caste in order to function. There needs to be a very large population of people tied to specific plots of land for the feudal structure to exist. Without such people the Manor system can’t exist, and without the Manors, the political structure will implode. In Europe these imprisoned people were called serfs. In the Confederate States of America, the role of the serfs was played by African and African-American slaves. So like it or not, when you talk about the Confederate States of America, you’re talking about a political entity for which slavery was an essential characteristic.

So let’s get back to the symbols. The Confederate Navy Jack was a battle flag, and during the actual Civil War wasn’t very wide spread. It was the “Stainless Banner,” and later the “Red Stained Banner” that were the ones that stood for the political ideals of the Confederacy. For this reason, it’s just as well that the political flags of the Confederacy can only be seen in history books and museums. But the Navy Jack is still a common sight in many parts of the United States.

For many African Americans, the Navy Jack often triggers the very same level of hatred, fear and anger that the hakenkreuz does for modern Jews (especially in Europe). Flaunting the banners of the Confederacy – a nation that promoted white supremacy and defended the practice of slavery – is ultimately an insult to African Americans and many other ethnic groups. It can even be argued that it’s an insult to the United States in general. No matter how you look at it, the Confederacy doesn’t deserve the nostalgic, favorable view it currently enjoys.

The Confederate States of America are part of history, and cannot be forgotten. But history – as preserved in books and museums – is where that failed political experiment belongs. It no longer belongs on flag poles.

Statues of Confederate war heroes have also come under fire in recent months. That issue, while related, is different from the flags, so I’ll talk about that later.