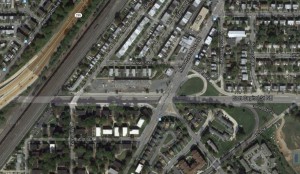 The stage for this little drama.

Since the debacle in Ferguson, Missouri, racial tensions have returned to public prominence, and many stories have come to light. This is one such story.

It was May of 1999. I was driving on Minnesota Avenue, in the northeast quadrant of Washington, DC. My ultimate destination was a business on East Capitol Street SE: a local business that sold vintage and refurbished stereo equipment (among other things). Those of you who are familiar with the District know that Minnesota Avenue and East Capital Street (later Central Avenue) go through some high crime areas. When I started out, I wasn’t thinking about that. After all, I was going to be in a moving car for most of my trip, my goal was a well-lit and busy commercial area, and it was in the middle of the day.

Since it’s been well over ten years, I’m probably blurring some details. But this is how I remember the situation.

I was driving south on Minnesota Avenue, having just gotten off Kenilworth Avenue. The interchange between Minnesota Avenue and East Capitol Street is a type of clover-leaf, as these can both be very busy streets at different times of the week. I stopped at a traffic light, about a block short of the clover leaf. Minnesota Avenue turns into a two-lane boulevard near this point, like many major District streets do, and the resulting islands are common locations for Metrobus stops.

I was next to one of these bus platforms, waiting for the light to change, when from out of nowhere, there was a very loud tap on my car window. Startled, I looked to my left, to see what I can only describe as a very dangerous-looking young man glaring at me. I must point out that his appearance put me on the defensive. He was wearing a black leather jacket, a black knit cap, and sporting a goatee. He was also African-American. A group of three or four similar young men were a short distance away, and they were giving me similar glares. I opened my window just a crack and asked, as innocently as I could, “Can I help you?”

His response was alarming: “What are you doing here, honkie?”

I was suddenly very frightened.

This is where, I suspect, I messed up. I hadn’t been looking for trouble; I was looking for a local address, and still had a few blocks to go. The look on this man’s face, and those of his companions a few yards away, put me in what I can only describe as mortal terror.

“I’ll leave when the light changes,” I managed.

The light turned green, and my tires made a screech worthy of a Hollywood car chase as I sped away. Instead of turning onto East Capitol and resuming my mission, I made my way to the nearest on-ramp for the local expressway, and started back home as quickly as the speed limit allowed.

By the time I got to my apartment my pulse had returned to normal. I had wanted to see the store in person. I was curious about what other products they might have had, and I could have found something else of interest. But I never made it there. Still, I called the store and inquired about the stereo component I was looking for. As it turns out they didn’t have it. I said “thanks anyway,” then informed the gentleman about what had happened just a few blocks from his place of business.

He was furious. He asked me if I could describe the kids in question, which I did as best I could. He then said he would speak with some other businesses in his block to see what could be done. I can’t imagine any business owner would be happy if a group of kids were scaring away potential customers.

I guess I did the understandable thing, but did I do the right thing? What could I have done instead? Should I have told the man at the bus stop that I was looking to patronize a local business, and didn’t want any trouble? Should I have shrugged, ignored his threat, and continued on my way?

People have told me that what I did could be considered self-defense, or self-preservation, and that no one can blame me for that. But at the same time, I can’t help but think that by allowing myself to be frightened away like that, and by paying more attention to “profiling” (remember how the men were dressed), I ended up aiding and abetting the problem of inter-racial tension, and help to perpetuate the existing cycle of violence.

I, perhaps unwittingly, became part of the problem.

What would you, gentle readers, have done in my place?

Some months later I mail-ordered something form the stereo vendor, so I did ultimately give them some business. But I never visited the store in person. In fact, I avoided that part of the District from that point on.

By 2005, that store had closed. I understand the owner retired.