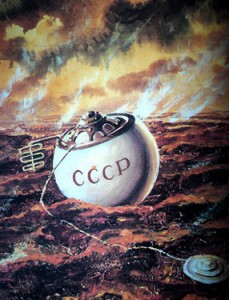 An artist’s portrayal of Venera Seven on the Venusian surface.

Today is another anniversary in space exploration, though not one of the better known ones. This day in 1970 was the first time a vehicle from earth landed on another planet. That vehicle was Venera 7, and it was part of the Soviet Union’s program to explore the planet Venus. The Russians had attempted to send probes to Venus before, but Venera 7 was the first one to successfully reach the planet and send back data.

The craft was launched at Baikonur on August 17 of 1970, and entered a rapid trans-planetary course toward the second planet. It is believed to have reached Venus around December 10 of that year, and the lander portion of the probe entered the atmosphere on the 15th.

When the lander entered the atmosphere, the transmission suddenly became garbled, and receivers couldn’t tell what was going on. Their worst fears were that the probe had been destroyed on impact. But, they allowed the recording tapes to keep rolling, in hopes that something could be found.

As it turns out, the probe did reach the surface of the planet, and transmitted for almost 23 minutes. It is believed that either a malfunction in the parachute system, or the high Venusian winds, caused the probe to land on it’s side. This put the transmitter antenna in a very poor position, curtailing it’s functionality. But even so, Venera 7 sent back several temperature readings of both the surface and the atmosphere.

The Russians were understandably disappointed at the mediocre performance of Venera 7, but at the same time, the information they did receive proved invaluable. Theories about the nature of Venus had been floating around the scientific community for almost a century. Venera 7 sent back hard facts about what the second planet is like. The incredible atmospheric pressure and exceedingly high temperature (an average of 885° F) was a far cry from the “wet Venus” theory that was still popular as late as 1970. Earth’s twin proved not to be a moist, pastoral land, but a hellish hothouse.

In short, Venus is not a nice place. The unforgiving and corrosive atmosphere of the second planet eventually damaged the probe, causing it to break down. Venus has developed a reputation for destroying probes in this way. Of all the probes send to Venus, both American and Russian, none have managed to last more than a couple of hours.

Venus is still an object of study because it’s a casebook example of what runaway greenhouse gases can do to a planet. The full history of Venus’s atmosphere hasn’t been settled yet, but there is evidence to suggest that it wasn’t always so heavy on carbon dioxide, and may have been more Earth-like in the distant past.

Will humans ever visit Venus? I suspect in time they will, but the nature of their visit is likely to be pure science. Science fiction writers (myself included) like to imagine a terraformed Venus serving as a home for space faring humans, but empirically speaking the likelihood of that is very small. There is evidence to suggest that Venus holds enormous mineral wealth, which could be useful for many human endeavors. But the hellish climate of Venus pretty much renders such wealth inaccessible, unless a way is found to either clean up the atmosphere, or develop robots that can operate under the extreme conditions.

If humans want to colonize another planet, Mars would be much better candidate. But the strange allure of Venus, the Evening Star, persists. Don P. Mitchell’s website has some good information about the exploration of Venus. One of his essays, entitled Plumbing the Atmosphere of Venus, has information specific to Venera 7.