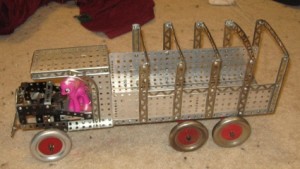 This is something that appeared on my older blog, “Time to Bolt,” and was originally posted on June 16, 2012. The content has remained largely unchanged.

This model was built in December of 2011, and was the first true Erector model I had built in over a decade.

The core design came from the “Engineers 7.5” set. The “How to make ‘um” book from that set contained instructions for a set of chassis, and then several models that could be built on those chassis. This particular model was a custom design. After building the chassis, I threw in all sort of features from the other models and came up with this concoction. 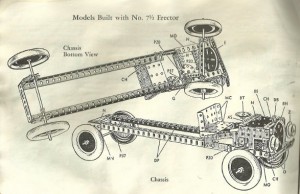 The Engineers set included illustrations for a feed and grain truck, an ice truck, trolley repair truck, fie engine and dump truck, all based on the chassis model.

This set of models was probably a throwback to the Erector “White Truck” set from the 1920’s. The more elaborate chassis parts, like the radiator grill and engine hood, were not included in the Engineers set, but they weren’t hard to simulate using other parts. Truck models have been a standard for Erector builders since the earliest sets; they are almost as pervasive as the walking beam engines. It’s not hard to see why. The basic chassis could become the foundation for dozens of different models. Essentially anything with wheels could be built from the standard chassis, or a variation of them.

The result reminds me of the heavy farm trucks that used to operate in the 1930’s. A given farm may have only one truck available, and because of the economy in those days, the truck had to do just about everything a working farm would need a truck for. It might carry produce in the morning, equipment in the afternoon, and livestock in the evening, with only a quick rinse with a hose between jobs.

The model was fun to build, and my daughter had a lot of fun playing with it once it was finished. As you can see, a My Little Pony is currently driving the truck. I have absolutely no idea where the pony is driving the truck, or what was going to be riding in the bed when it returned. But it do know that the truck itself had no trouble doing the job.

The model itself was broken down around New Year’s, when the parts became needed for another project. If I ever manage to acquire the specialized chassis parts, like the ones from the White Truck set, I’ll certainly do some more truck building. 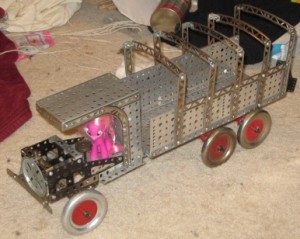