It’s Time to bolt! This one is an Erector classic! 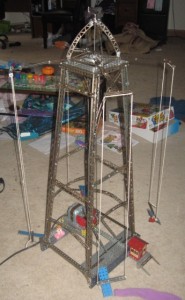 The rotary airplane ride is an Erector set standard, at least since the 1930’s. By the late 1940’s, with the amusement park set, numerous variations of the model were possible. 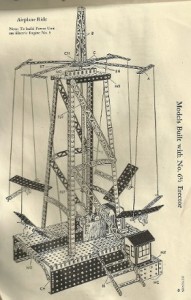 The core design I used was from the 6 ½ set of the 1940’s. I made the base wider to accommodate a higher tower, and the top was borrowed from a merry-go-round design. The airplanes were made using Class-III parts instead of Class-II. This was done because the later parts tended to have brighter colors, and generally were made from lighter metal than their earlier cousins.

The rotating top used a clutch design. That is to say, it wasn’t attached to the rotating axle. A BN turret plate was attached to the rotating axle, while a similar plate was part of the top structure. When the model was activated, friction between the two turret plates gradually caused the top structure to start rotating. Eventually, the airplanes would settle into a steady rhythm as shown in the video below. At the same time, when the motor was disengaged, the top would slowly loose momentum and the planes would lazily fall back into their resting position. When the top structure was affixed to the rotating axle, the planes would spin up to full speed immediately when the motor was engaged. Even worse, when the motor was disengaged, the forward momentum of the planes caused them to wrap around the tower! Such an occurrence would have been very traumatic, not to mention dangerous, for anyone riding one of the planes.

Doc, over at Girders and Gears, used a clutch system like this for some of his models, and it was from here that I adapted the idea. In addition to giving a more realistic looking performance, it greatly reduced binding and stalling, which made life easier on the A49 motor.

Video made by Lisa Pugh, featuring Caitlin and Dr. Watson.

One thought on “Airplane Ride”