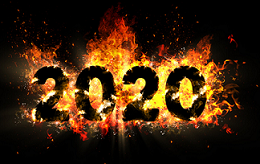 I’ve said it before: New Year’s Day has never been one of my favorite holidays. But this year, I’m fine with it. As I write this, 2020 is in its final death throws. In less than 72 hours it will be added to the ever growing scroll of history, and good riddance to it. In the course of the last 12 months the world has seen all kinds of crazy stuff, and many of us are at a breaking point.

The one aspect of 2020 that has dominated the collective conscience more than anything else is the pandemic of Covid-19, also known as the corona virus. It has disrupted almost every facet of all people’s lives, and the residual effects are going to continue well into the future. I don’t have to go into how the partial quarantine has altered things. People grumble about it all the time. We have also seen how the social distancing guidelines have thrown us for a loop, often in ways we couldn’t have imagined.

We have seen that we can survive without certain luxuries. Frequently eating at nice restaurants is fun. But it’s also expensive, and with social distancing guidelines in place it can be very rather risky. Going shopping can be fun, but the typical shopping mall is a serious vector for C-19, and probably best avoided. Many popular entertainment venues, like movie theaters and amusements parks, have been silent since April. And as it turns out, we can live without them. But we don’t really want to. These luxuries are some of the things that make life enjoyable, so it would be unfortunate if they went away forever. Sadly, in some areas that is happening. The economic fallout from eight months of low activity is proving too much to handle, especially for places with high operating or maintenance costs.

OK, so those of us who enjoy some of life’s perks have been getting by with less. Fine and good, but other things have become apparent. There are many people who never had the resources to enjoy these luxuries. They have been living from paycheck to paycheck for years, so extravagances like the ones I mentioned were never on their docket. And then there are the people who worked in service industries that were closed down during the pandemic, and are still not expected to full re-open until spring of 2021. All of those restaurants, shopping malls, entertainment venues and the like, provided people with jobs and livelihoods. When the pandemic went into full swing, they were suddenly unemployed or under-employed.

I experienced some of that myself. My company provides logistical support to a variety of other companies, including restaurants and shopping venues. When a large portion of our client base went dormant, our workload dropped. For almost three months I was working at reduced hours. Given that our clients also include hospitals and grocery supply chains, we were considered an essential workforce component, so we kept working. But even so we were under-employed, and that created some financial strain. I have to cringe when I think about those who completely lost their jobs.

We also saw how inefficient our health care system really is. Hospitals and clinics did their best to manage and control the spread, flow, and treatment of Covid-19. But shortfalls in logistical management, and some very poor leadership from the government, often meant that these facilities didn’t have the resources they needed. Of all the world’s nations who have had to struggle with Covid-19, it can be argued that the United States has handled it worse than anyone else. At this writing (30 Dec 2020, 11AM), 339,000 Americans have died from Covid-19 (according to the New York Times, via Google). The unemployment rate is 6.7%, which is lower than I expected, but still rather alarming. However, the under-employment rate is 13.7%, which doesn’t surprise me. Mind you, measuring “under employment” is inherently subjective, so there may be some flawed statistics in there. But just the idea of more than one out of every ten people is under-employed is enough to give pause.

We’ve also seen how selfish some of us can be. While finances get tighter and tighter for the average worker, a very small percentage acted like war profiteers and made billions during the pandemic. Prices for many goods and services have gone up, while the cash flow to the average worker remained stagnant. We even had some civil leaders say it was more important for the average worker to risk contracting Covid-19 by returning to work, than it was for the economy to remain stalled. There were those who decided it was more important that they continue to enjoy life’s luxuries, than allowing those less affluent to be safe.

A Covid-19 vaccine is starting to be circulated. It will take three or four months for it to work it’s way through a sufficient portion of the population to be effective. But even so, an end to the pandemic seems to be in sight. Then, as the saying goes, we can get back to “normal.” I am going to join those who have been saying that we shouldn’t go back to “normal,” because we’ve seen what a mess “normal” can be. Something like this pandemic is likely to happen again, be it another disease, a natural disaster, or a massive social upheaval. We need to be better prepared for it, and we should learn from our mistake.

Can we learn from our mistakes?