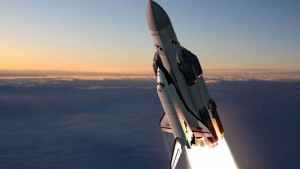 November 15 is the anniversary of one of the biggest “what if” stories in the history of space development. The exploits of the United States Columbia class space shuttle are well documented, but on this day in 1988, another contender appeared.

Under a veil of secrecy, the Soviet Union launched a re-useable launch vehicle of their own, called Buran (Snowstorm). On the surface, the resemblance to the United States counterpart is obvious, but the engineering was a bit different. For example, Buran did not have an on-board launch engine. Whereas the American shuttle carried a trio of heavy rocket engines that fed off an external fuel tank, the Buran orbiter was designed to ride as a side-mounted payload on a specially configured Energia booster. This would have given Buran a larger payload capacity than the Columbia class shuttle, but at the same time, Buran wouldn’t have had the orbital range of a Columbia. Buran would have been limited to low-earth orbit, which would have been fine for visiting Mir, or later the International Space Station. But something like the Hubble telescope, or any of the high orbiting communication or research satellites, places that the Columbia series did visit, would have been beyond Buran’s reach.

Another major difference with Buran was that the ship could be flown entirely by remote control. In fact, her one and only flight was handled entirely by ground control crew, and the flight was almost flawless. The idea was that Buran could be used both as a personnel transport module, and as a recoverable excursion module. There were some scientific and military missions planned for Buran, mostly in the area of materials engineering, where the orbiter would remain in orbit for several months while on-board computers conducted experiments on various materials. At the conclusion of the experiments, the orbiter would return to earth, loaded with samples.

The biggest difference with Buran was its overall modular design. The Columbia series had some modularity, but not to the same extent. The Buran program had specialized modules and components that could perform a wide variety of applications. All of the components used the same core specifications, making it possible to piece together a targeted spacecraft for almost any type of mission imaginable. It was a wonderful design, with a lot of potential.

Unfortunately, this versatile and modular design was perhaps it’s downfall. Many people have criticized the Columbia series for its extreme cost and sometimes unreliable performance. The big irony here is that the Columbia series had been optimized for cost efficiency! At one time, the Space Shuttle program was as extensive and ambitious as Buran, if not more so. But over time almost every optional feature was removed in the interest cost cutting. And even with all of the cost cutting measures, the Space Shuttle was never as cost effective as the designers had hoped. Many people have looked at the original specs and determined that given the available technology, the Shuttle would never have been economically viable.

Buran had the same problem, only more so. The Soviet Union, having a command driven economy, wasn’t as concerned with cost effectiveness as the United States, so it designed it’s shuttle program to full spec. When Buran made her first test flight in 1988, the system was taking shape at various facilities around the USSR. But the infrastructure, manpower, and supply requirements were turning out to be enormous! Even the most liberal of estimates were falling far short of what was actually going to be required. But the Russians soldiered on.

Sadly, by 1990 the shortfalls of the Soviet economy had become impossible to ignore, and Buran’s future looked bleak. Just about everyone in the USSR knew that things could not continue as they had been since the 1920’s, but no one yet knew what would emerge to replace the old system. There was hope that with proper planning the Buran program would continue, but it didn’t.

The USSR imploded in 1991, and the Russian Space Agency officially cancelled the Buran program in 1993. There are some who theorize that the extreme cost and breadth of the Buran program was a key cause in the Soviet Union’s collapse. I don’t know about that, but it certainly didn’t help.

Here is the most bitter pill of all. The USSR built their space shuttle program to full spec, and it proved too large and too expensive to maintain. The United States, meanwhile, built their program for cost efficiency, and ultimately it was still too large and expensive to maintain! Aerospace designers on both sides of the world have since concluded that the “reusable shuttle” concept was an unwise path from the beginning.

What makes Buran a big “what if” scenario are the events that followed. The orbiter itself was placed in a hanger near the Baikonur in Kazakhstan. At some point in the late 1990’s, when the space faring nations were planning what eventually became the International Space Station, there was a lot of exchange of ideas between the Russian and American aerospace designers. At one point, a handful of engineers from the Space Shuttle program examined the Buran orbiter, still languishing in its dusty hanger. They concluded that with a mechanical overhaul and an upgrade to the electrical system, the Buran could be made space worthy again. Given that heavy rockets capable of lifting the orbiter were still being built and used by the Russians, and the Americans had groups of technicians available to service shuttles of a very similar design, the necessary infrastructure and manpower was available. It would have taken some tinkering, but Buran could have been made operational for the building of the International Space Station.

It’s likely that the program would have eventually become unmanageable and out of date, much like the Space Shuttle program did. But it could have been made operational for a time, and during that time it would have been a boon. If the space faring community had access to another shuttle, the station could have been completed as much as three years earlier. Had that happened, many other options might now be available in the area of space development. If nothing else, the aerospace community would now have more experience with heavy lifting boosters and computer-based navigation. I suspect the cost of getting Buran operational again was too much for the coalition of nations to seriously consider, especially since (in theory) four space shuttles were already available.

When the fleet of operational shuttles went from four to three in February of 2003, it was too late. Buran’s life ended with a sad whimper. Poor maintenance of the hanger where she was stored caused it to collapse during a storm in 2002. Eight workers were killed, and the orbiter itself was destroyed.

The Russians are currently designing a new generation of Soyuz capsules for future applications, and some of the technologies developed for Buran are being re-visited. This is not unlike the Orion program, which incorporates many technologies from both the Space Shuttle program and the earlier Apollo program.

The legacy of Buran is still being written. 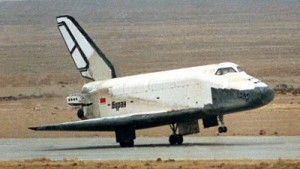