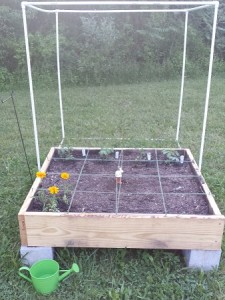 For many years, I have wanted my own vegetable garden. Why? I used to grow vegetables as part of a 4H program back in Cortland, so perhaps I still had the bug. I also like to idea of growing some of my own food, especially in the hectic rat race that is life in the early twenty first century.

Last year I made my first real attempt at a vegetable garden since moving to Virginia. It was a square-foot garden, as described by Mel Bartholomew and others in various publications. 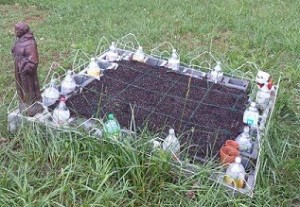 Empirically speaking, it did not do well. I planted around Memorial day, which turned out to be a bit too late. A blistering heat wave in June really did a number on my plants. Most of them failed to thrive, but a few made it. I was disappointed, but not deterred. A learned a lot, and decided that this year I would do better. 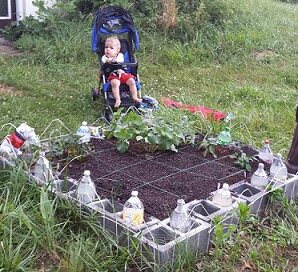 As you can see, it started out all right, but things didn’t hold up.

One of the problems I had with last year’s garden was placement. It was very close to the septic tank, so weeds were prolific and relentless. So much so that I was unable to contain or control them. So I selected another location that was dryer and less prone to weeds, even though it was further from the house.

I also determined that this year I would make a proper raised garden box. I suspect part of my weed problem had to do with my earlier box: a section of dirt cordoned off using cinder blocks. Such a configuration poses little resistance to invading crabgrass. So I found a design for a raised, square-foot garden at the University of Florida’s web site, and chose to use something like it.

In addition to weeds, irrigation was a problem. I suspect the heat wave dried out my soil, preventing some of the seeds from germinating. So I decided to try using an olla to help against this. The olla is a very ancient method of irrigation, dating back to ancient Babylon, and it is still used in many parts of the world. In the event of another heat wave, I’m hoping the olla can help keep most of the soil moist, even if the top layer turns to hard clay.

The final problem I had was wildlife. I like furry, woodland animals as much as the next guy, but I was less than thrilled to discover that rabbits had feasted on my radishes, and that deer had made off with my spinach. This year I would also have to take precautions against animals. The large PVC structure is designed to keep animals away from the garden. Around this cubical structure I attached wildlife netting, which is designed specifically for this purpose. Wild animals can visit my land any time they want. I just don’t want them raiding my garden!

The box is a fairly simple design. Untreated planks of lumber, two by ten inches, form the walls, while a layer of outdoor grade plywood forms the floor. Four balusters are used to hold up the plywood. The carpentry phase of construction took roughly an hour. Once the box was constructed, it was moved into position and placed on a quartet of cinder blocks. Weeding mesh was affixed to the floor of the box before filling it with “Mel’s mix.” Finally, for the distinctive grid, I used garden chord. Lattice wood is recommended, and I may go with that for the second box. I’ll describe the construction of the box in another article. 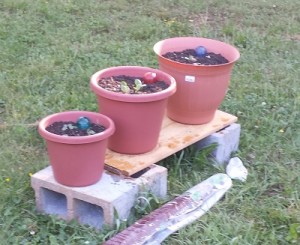 In addition to the core box, there were three other vegetables I wanted to try: zucchini, spaghetti squash, and okra. However, I wasn’t sure how they would handle the growing conditions I was working with, so I chose to plant them in large containers. If they work out, I’ll integrate them into a square foot garden in a future season. For these three containers, I simply took some inexpensive garden pots and filled them with some soil that I saved from last year’s garden. Instead of an olla, like with the main box, glass watering bulbs help with irrigation and soil moisture.

At this writing, I have four transplanted tomato plants, some transplanted marigolds, six cucumbers, and several bush green beans growing. I attempted to grow green peppers, but the weather hasn’t been conducive to those. So I have replaced them with some radishes and black seed Simpson lettuce.

Three of the tomato plants appear to be doing well, the cucumbers are growing slowly but steadily, and the green beans seems to be doing very well. The radishes and lettuce should break the surface in another week. In the containers, all of them have thriving sprouts. I even had to thin them out a bit.

So far, things are doing better than last year. That extra three weeks seems to have helped.