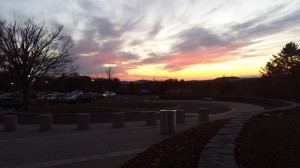 I’ve talked about Thanksgiving, and I’ve talked about Christmas. What can I say about New Year’s Day? That’s a tough call. Of the three holidays in the triumvirate we call the “Holiday Season,” New Year’s Day is the one that has the least meaning for me. I don’t dislike it, but I also don’t have many fond, lasting memories associated with it.

Over the years I’ve attended some great New Year’s parties. When I was growing up in Upstate New York, one of my father’s colleagues used to throw a huge party on New Year’s Day that lasted the whole day. It was a fairly formal affair for the adults, but all the kids would gather in the basement play area and have a great time. When I moved to Washington, DC, I attended a few First Night celebrations, which were great fun. And the Catholic Alumni Club managed to pull off a good party or two, when the conditions were right. And other years I would just hang out with friends and stuff myself with more junk food than you can imagine. But all of that has been fleeting.

Unfortunately, when it comes to New Year’s Day, what I remember most clearly are the bad things. Many news programs and services have “year in review” articles that tend to be recaps of whatever bad news transpired during the previous 364 days. Growing up, I remember my father going into a fit of melancholy whenever the bad news was revisited. Perhaps that rubbed off on me. On January first I often find myself thinking back on what I’ve done wrong, could have done better, or failed to do entirely, during the previous year. Even when I was at a party and having a grand time watching that ball drop, some small part of me was always thinking back on the bad that is in the world.

So to everyone reading this, I hope that 2015 brings you good fortune. And let’s all try to make 2015 the year that we solve, or at least alleviate, some of this world’s pain.