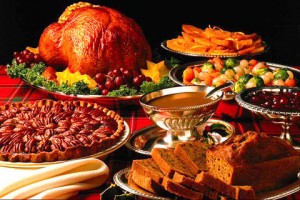 Call it whatever you want. The fourth Thursday of November is the day the citizens of the United States set aside to acknowledge and give thanks for whatever good fortunes life has given them. The holiday has some religious connotations for many, but on the whole it has long been considered a civil holiday. It probably has its roots in the harvest celebrations of the Pilgrims and Puritans of colonial New England. Harvest celebrations are as old as civilization itself. It’s just that the denizens of the Massachusetts Bay colony (both the natives and the imports) managed to do this particular dinner party with such gusto that Thanksgiving as Americans understand it is often credited to them.

Different countries have their thanksgiving holiday on different days, depending on when the harvest traditionally comes in. The closer you are to the Arctic Circle, the earlier in the year the harvest. That’s partly why Canada, for instance, has their Thanksgiving holiday in October. I suspect if you did the research, you could find harvest holidays every week from October through December, somewhere in the Northern Hemisphere.

But enough history. A lot of people like to share memories they have associated with Thanksgiving. For me, I’m afraid it’s pretty pedestrian, but amusing in its own way. I grew up in Central New York, and by late November, snow and ice had usually moved in for the winter, and that tended to put a damper on things. As such, my family didn’t always travel, though occasionally we would have friends over.

Thanksgiving at my house usually started with getting up early enough to watch the Macy’s Day parade. Like most kids, I waited impatiently through the musical numbers and scores of marching bands just so I could see the balloons and fancy floats. As I got older and started studying music I developed a greater appreciation for the bands and musical performances, especially some of those precision band drills. By the time I was a teen I had also acquired an appreciation for the flag girls, majorettes, and of course the Radio City Rockettes. Though I suspect that had more to do with the really short costumes and my being a teenage male than it did with dance routines and parade drills.

After the parade was finished, we would have a very light lunch, with the aim of saving room for dinner. Mom would then hand my brother and I an assortment of vegetables, fruit, and loaves of bread, which we were instructed to chop up while watching King Kong. I never understood this, but every Thanksgiving, one of the regional television stations in New York City – I think it was WPIX – ran a group of giant ape movies. They usually started with the original King Kong, followed by Mighty Joe Young (also the original), and then some other ape movie. Some years it was Son of Kong, others it was King Kong versus Godzilla, and there were other titles in the rotation. However, by the time the third ape movie came around, dinner was close to ready, so we often missed it. And we were OK with that, because by that point we had been glued to the television for as much as eight hours, and our eyes itched.

All those vegetables my brother and I chopped up (carrots, potatoes, turnip [yuch], broccoli spears, and celery), and the loaves of bread (which became the base for the turkey stuffing), morphed into a traditional Thanksgiving dinner that couldn’t be beat. My mom followed her mom’s example when it came to Thanksgiving dinner, so no one left the table hungry. And even if you were full after dinner, there was still dessert, usually three different types of pie. (That’s where most of the fruit went.)

After dinner, the various leftovers were packed up into serving sized containers which we would live off for close to a week. The dog was treated to a handful of table scraps, and some poor soul was assigned dish washing duty. My dad often got stuck with that one. In later years, when we had an automatic dishwasher, it became much easier. After that there wasn’t much more to do, so the day quickly wound down. Given our collective tryptophan-induced stupor, that’s not surprising.

Now, there were some years when we traveled for Thanksgiving. One of our more common destinations was the home of my maternal grandparents in Lawrence, Massachusetts. As large as my mother’s Thanksgiving feast was, my grandmother – I called her Memere – took it even further. Her feast was enormous! At the time I had several extended family members in that part of New England, and it was customary for all of them to descend on Memere and Pepere’s for Thanksgiving dinner. The side dishes numbered in the double digits, and one year there were two fifteen pound turkeys! Sometimes Memere would have two or even three sittings. It’s rather hard to describe, but one of Memere’s Thanksgiving feasts was certainly an experience.

But then, I probably don’t have to describe it. I’ve heard many people tell of similar family feasts, and some families still have them when they can. So I suspect most people have been to such a gathering, be it Thanksgiving or otherwise.

For the past several years, Thanksgiving has been at my brother’s house in Maryland. The drill is oddly familiar to the one I had growing up, only without the ape movies. Usually my nephews and daughter are watching a DVD of a Disney movie while the rest of us go about preparing dinner. This year will have the added challenge of herding my very ambulatory two-year old son and preventing him from getting into everything and anything. I will also be singing at church that morning, so we’ll be arriving later in the day than in past years. I suspect in years to come the children will have their own version of this essay, where they talk about the amusing and memorable things that happened on Thanksgiving Day.

But you know what one of the best things about Thanksgiving Day? It is little essays like this one, or rather what this essay describes. My father has been gone for over 20 years. At the last few Thanksgivings in Homer, New York, there was a noticeable absence at the table. But I still remember him, very clearly. My maternal grandmother has been gone for over ten years, and she hadn’t done one of her massive feasts for roughly another five before that. Many of the extended family that I used to see at these gatherings have also passed on. Others, I’m sorry to say, we no longer have contact with, because of a major schism within the family a few years back. But I can still see all of their faces.

Memories, big and small, funny and sad, touching and inspiring, are precious things to be collected, remembered, and cherished. And once a year, be sure to give thanks for them.