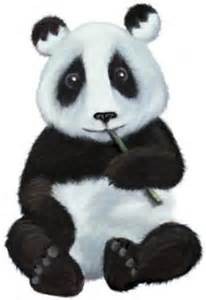 A few people have asked me about this furry character, which appears on my Window Maker page. Her name is Amanda Panda, and she was designed to be a mascot for the Window Maker x-client. Notice the pattern on her ears.

I first heard about this mascot circa 1999, during my Linux phase. From the look of things, the idea didn’t stick. The original page that promoted her vanished a long time ago, and the only place I was able to find record of it was through an Internet archive site. I took this screen shot using my smart phone: 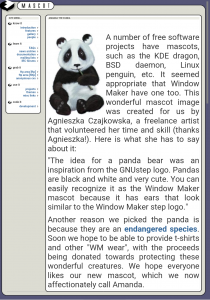 The original page came from an earlier iteration of the official Window Maker site, and it does not have a counterpart on the current site. Regarding the artist, there is a performing artist and singer named Agnieszka Czajkowska, but I don’t know if this is the same person who is credited in the description. Also, the giant panda is no longer on the endangered species list; it has been upgraded to ‘vulnerable.’

References to Amanda in the context of Window Maker are few and far between. Author Christopher Whittum has some information about her, and Window Maker in general. He also developed a Window Maker theme based on the character. Programmer Raj Shekhar also provides a few details, including this cartoon-style variant of the mascot drawn by David Bouley. 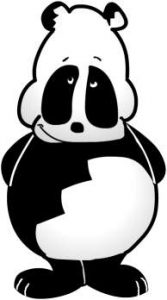 The name ‘Amanda Panda’ has been, and is still being, used in a variety of ways. It is frequently used as a nickname for any woman with the name ‘Amanda,’ for example. There is also a video game character named Amanda Panda, who is associated with a number of mobile device games of the slot machine and falling gem variety.

But if a generic Google search is anything to go by, one of the best known uses for the name, at least in the context of a contemporary mascot or logo, is for the Amanda the Panda Family Grief Center near Des Moines, Iowa. This place provides counseling services for families who have lost a loved one. I suspect they chose a giant panda because the animal often creates ‘warm fuzzy’ feelings. Just look at them! If you’re trying to help someone deal with a terrible personal loss, creating such a feeling is a good place to start.

It wouldn’t surprise me if there is a copyright or trademark issue in play regarding the use of the name Amanda the Panda. If that is the case, and only one organization or group can use Amanda as their mascot, I think it should go to this center. For my money, their work is far more important than an x-window manager, or a group of video games.

Though it would be funny if this center used Linux or FreeBSD to run their computers, and even funnier if they used Window Maker as their x-window client.

So regarding Amanda’s status as the official mascot for Window Maker, it either didn’t catch on, or it was deliberately dropped. This is unfortunate in one way, because she is just so darn cute! But ultimately it may be for the best. The world of open source software is littered with animal mascots, some of which are pretty silly, and it doesn’t really need more of them.

And for some folks, the use of cute animals like penguins and little red daemons to promote software is at best unprofessional, at worst juvenile. It’s true: there are people who do not like cartoon mascots. Especially serious people who are trying to run a serious business. (Does anyone remember the backlash Microsoft endured over Clippy?) Perhaps because of this, programs that are tightly associated with a cartoon mascot aren’t always taken seriously by the very people who might want to use them. This isn’t a widespread attitude, but it happens often enough to be an issue.

The world of computers can be a very fickle place. Just ask Amanda, the Window Maker giant panda.