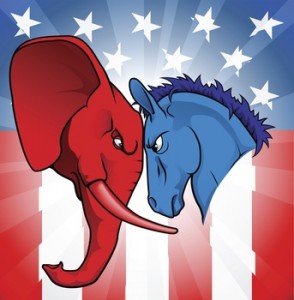 Earlier this month, the United States had something that passed for an election. Given that there was an average voter turnout of about %40 per district, I’m not sure how much of an election it really was. My initial response was “whiskey tango foxtrot?!?” But looking back, I should have seen this coming.

I’m not surprised that the Democrats lost their simple majority in Congress, because they have been acting like a bunch of moping sad-sacks lately. Instead of celebrating the achievements they have managed to pull off in the last few years, they were apologizing for them! Did they really think such talk would bring in swing voters? Did they consider that they would be alienating their core voters? And when did they decide that alienating the President – a sitting Democratic president who has some good victories to his credit – would be a good thing? Apparently someone spiked the DNC’s cool-aid! The Democrats screwed up big time, and arguably got what they deserved.

I’m also not surprised that the Republicans failed to get the overwhelming majority they were hoping for, because they’ve been sounding like a bunch of paranoid lunatics lately. They managed a simple majority, but not the crucial two-thirds majority. Seriously guys, did you think that ranting and raving about immigration or the Affordable Health Care act, or of constantly bringing up images of death, destruction, doom and gloom was going to give you a mandate? Apparently they did, and a lot of people fell for it, but not quite enough.

But, having a simple majority isn’t enough to instantly override a VETO, which may be a good thing, because it means those few good things that got through the system during the last few years will be hard to remove. But it also means we’re going to get another two years of gridlock, partisan bickering and unrestrained vitriol thrown at the President and who knows who else, and perhaps another furlough or two.

Personally, I lean Democrat, so naturally I was disappointed at the outcome. But I think what bothers me most of all is just how politically divided this country has become. Both sides of the political aisle have ideas on how to run the country, or how to solve it’s problems. For most of our history, the two sides would debate issues until a some type of consensus was reached, that met some of the objectives of each side. Constructive discourse generally got good results. But that seems to have ended!

Now there seems to be a growing belief that the only way to deal with the opposing side it to shut them out completely, and keep them shut out until they unconditionally cave. The objective has not become achieving a consensus, but at destroying the opposition. When did the political climate change to the point that destroying an opposing party became the primary objective of each political faction? Whatever happened to actually debating, finding common ground, and coming up with a compromise solution? In a country as large and diverse as the USA, no political party is ever going to get an unrestricted mandate. I personally can’t wrap my head around what is happening any more. Every attempt at a logical analysis leaves me scratching my head, so much so that it’s starting to bother my sinuses. But, I have become aware of two things.

First, the Republican Party leadership (and many other conservatives) are jerks. They are greedy, short sighted, jingoistic, anti-intellectual, and paranoid about anything new or different. Sorry guys, but the good ole’ days weren’t always so good, and some old ideas and practices need to fall into history. The country and the world have changed, but they still seem to be pining for the GOP heyday of the 1950’s, or even seeming utopia of the 1920’s! Anyone who has studied history knows that both of those periods ended badly, but they don’t seem concerned. And their general contempt for education makes me downright angry. They seem to have this notion that people don’t need to think, or that they should only learn what they really need, and be done with it. Sorry guys, but the ability to think and learn beyond our needs is one of the things that separates us from the rest of the animal kingdom, and to write that off as unnecessary is unforgivable. They also talk a good talk about traditional values and making lives better for everyone, but in practice they only thing they consistently do is send more money to the extreme upper class. But somehow they have managed to do the Pied Piper thing and got a lot of people following their agenda. I just don’t get it.

Second, the Democratic Party leadership (and many other liberals) are jerks. They have many unrealistic ideals, are self-righteous to a fault, and are exceedingly arrogant. They have this notion that if the general population would just listen to them for a few moments, and allow themselves to be educated (heh…), then they will ultimately see things the same way liberals do. Here too is the notion that their way is the only way. Do liberals really expect the general population to have some sort of epiphany where suddenly everything becomes clear and everyone realizes that the liberals were right about everything all along? Sorry guys, but some liberal ideas are not all that good. And, some people aren’t going to agree with you no matter how much you educate them. People don’t all think alike. After the reality check of the 1970’s, the liberals should remember that.

(There is some mia culpa in that last paragraph. I’m working on that personal flaw.)

So where does this leave us? In a lot of trouble, I suspect. I don’t expect the nation to implode within the next 24 months, so I’m not going to lose much sleep over it. I mean, it’s statistically possible that the nation’s infrastructure and social fabric will come apart, and that there will soon be rioting in the streets. (The Republicans seem to think that was imminent, but now that they have a simple majority, they would say we’ve dodged that bullet. Heh…) It’s also statistically possible that I’ll be struck by lightning on a clear day, or find a winning Powerball ticket in front of the local supermarket. If anything, one of those two events is more likely than the doomsday talk from either of the major parties. Elephant shit… donkey shit… it’s still shit and it still stinks.

A pox on both your houses!

In all honesty, I should probably keep a healthy distance from political topics, because I tend to get frustrated, loud, and irrational when discussing politics. But keeping quiet can be very difficult at times.

Anyway, both of the major parties seem to have shifted to their respective fringes, and historically that has never ended well. Each side seems to think that this time it will be different, which is exactly what they said last time. A one party system doesn’t work, so why both sides ultimately seem to want one is beyond me. Doesn’t anyone study history any more?

Those who cannot remember the past are condemned to repeat it.

This quote has been around since the days of Herodotis, perhaps longer, and has variations that stress different facets of historiography. American historian and philosopher George Santayana is credited with bringing the notion into (or perhaps back into) the mainstream consciousness through his various writings. But again, the sentiment has been around since ancient times.

But even so, the modern leadership of the United States doesn’t seem to remember it. Or worse, they don’t care. Those on the political right are too anti-intellectual to study history in the first place. They are so certain that everything will go their way no matter what happens, that reading history is considered a waste of time. Meanwhile, those on the left are too iconoclastic to put any value on what happened in the past, because they are all about the future and don’t want to cloud their vision with images from the past. Especially when it involves dead, privileged white guys.

Clowns [Democrats] to the left of me,
Jokers [Republicans] to the right,
Here I am, stuck in the middle…

Regarding the title of this article, I’m paraphrasing the Stealer’s Wheel song Stuck in the Middle, written by Gerry Rafferty and Joe Egan. The line has also been associated with Thomas Nagel’s book The View from nowhere. There could be a connection between the two, though if there is, the song came first. Stuck in the Middle first charted in 1972, while Nagel’s book was published in 1989.

Also, if anyone can provide me with a citation for the political cartoon, I would appreciate it. I don’t recognize the signature of the artist, and the metadata for my copy of the image has gotten mangled. That’s a librarian’s nightmare.