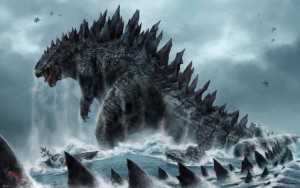 A couple of weeks ago, my family and I picked up a copy of the latest Godzilla movie (2014) from a local Red Box. We watched giant monsters terrorize the world, while we terrorized our stomachs with nachos.

The movie was fairly pedestrian, but not at all bad. Simply put, humanity tampered with things it didn’t fully understand. Ancient, dormant creatures were released as a result, and Mother Nature (Gaea?) had to bring out her 400-foot tall enforcer to put things right again. The story has been done before. Godzilla 2000 had a similar theme, though in that film the antagonist was an alien. In some ways, this movie reminded me more of the Gamera franchise than Godzilla, in that the star monster was less of a terror villain and more of a giant action hero.

Regardless, I thought the movie was fun. Personally, I would have liked to see more of the Big G and less of those MUTO things, though they were cool in their own way. The movie was pretty much what I expected from a Godzilla movie. Parts of it were more cerebral than many earlier Godzilla movies, and it certainly wasn’t a camp fest, but so what.

From what I have read, a lot of people were very disappointed by the film. Given the hype and anticipation the film received, I don’t think any movie could even begin to live up to the expectations of Big G’s fan base, but that’s something else. After trolling the various forums and fan sites (and when I say trolling I’m using it in the fishing context), the predominant theme I found was that people wanted something more apocalyptic. They wanted something with a more poetic, and decidedly frightening theme. Or they just wanted to see humanity get its ass kicked.

Actually, humanity did get its ass kicked, but it was by the MUTOs and not Godzilla. Perhaps that was the problem? Godzilla wasn’t the living embodiment of nuclear terror that he was in the 1954 original. That role was played by the MUTOs. Godzilla was actually one of the good guys! Or at least one of the less worse guys. He even got cheered when he saved San Francisco from being turned into gravel. And apparently, that left the fan base disappointed.

Me, I just shrugged and said “Meh, it was a Godzilla movie.” But I thought about the frustrated fans, and started wondering. Then I did something I haven’t done in a very, very long time: I drafted a fan fiction. Don’t worry, I didn’t write it, and I only got as far as an outline. But I tried to design a Godzilla story that would have been more in line with what his disappointed fans wanted. That is to say, an apocalyptic horror monster film that was loaded with messages and metaphors.

So for your enjoyment, here is that draft. Disclaimer: this is only a plot outline, and is intended here for purposes of humor. Nachos, soda, and a healthy respect for sarcasm is strongly recommended. 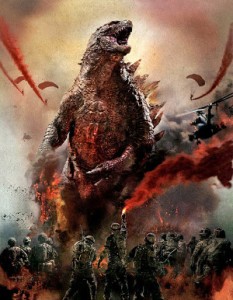 And that’s how it ends! Godzilla is going to destroy human civilization one city at a time, with the aim of knocking humanity back to a technology level that is naturally sustainable. That would most likely be a Pre-Industrial level, akin to the early 1800’s. That would involve some very traumatic adjustments on our part. The 80% population drop for starters. Humanity, all sections of it, have to collectively decide what to do while there is still a human civilization left to save.

And in case you didn’t guess, the Greek name means “God lizard king.” That seemed to fit nicely.

So, to all of you disappointed Godzilla fans out there, would that have been better? Is that apocalyptic enough? Did humanity get sufficiently ass whooped? (I’m honestly asking, and I’m trying to be sarcastic-funny, not nasty.) My wife says that a movie that follows this story is likely to get high critical acclaim for sheer chutzpah. But because of the inherent hopelessness of the story, it would be a commercial bomb.

Ah, what we have to endure in the name of art.