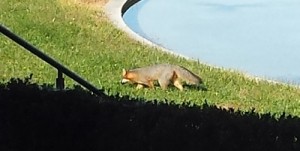 Here is another addition to the Mt. Pony menagerie, a North American red fox. The red fox is actually a meta-species, with sub-species all over the world. The North American branch can be found throughout the northern half of the continent, except for the Arctic north. That’s the domain of his cousin, the Arctic fox.

This particular one has been seen around Mt. Pony on several occasions, where he dines on the local mice. At one point he got caught in one of the humane traps the security people set up for catching a troublesome raccoon. That must have been embarrassing. At least for the fox.

And for the record, I have no idea what he says. 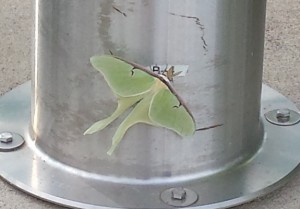 Actuas luna, commonly known as the Luna moth, can be found over roughly two thirds of North America, and is one of the largest lepidopterans in the Western Hemisphere. I’m guessing that this one, were it to fully extend it’s wings, would have covered my palm.

This one was seen outside of my workplace on the morning of June 15, 2015. From the size of the antennae, I’m guessing this is a female. The antennae of the males are much larger, and look like fern leaves. These creatures are largely nocturnal, and spend almost all of their adult life – all seven to ten days of it – mating and/or dropping eggs. Perhaps this one was resting after a busy night? 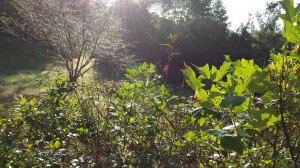 This photograph was taken from my front porch on the morning of September 26, 2014. At least that’s what the metadata says. It was one of those cases where the sunlight and morning mist were “just right” for a capture such as this. It’s uncommon to see a near geometrically perfect spider web. It’s even less common to get such a good picture of it. You will want to click on the image to see it at full clarity. It makes a good desktop wallpaper.

I don’t know what kind of spider made this web, but I suspect it’s a common garden spider. We have lots of those scurrying about. Whatever the spider, they made a darn pretty web!