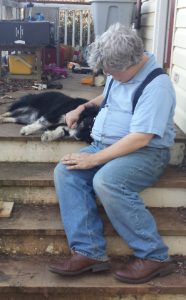 For me, 2016 will be remembered as a “bad year.” When it started, I was making plans for a year of accomplishment and success. Instead, it was the year where I watched my career decline, falter, and collapse.

I was diagnosed with ADHD in early March. When I first talked about this last June, I believed that I had survived the worst of it, and that things would start calming down. I was about as far from the mark as a person could be. Things were only in a lull when I wrote that article. They soon got uglier with each passing week.

I may as well set the stage and state that this doesn’t end well. Today, March 6, 2017, is my final day as an employee of the Library of Congress. After more than fourteen years with the agency, the complications brought on by ADHD have forced me to leave.

Now I’ll tell you how and why this happened.

First off, understand that removal from federal service – that’s really what they call it – is not a simple process. It takes a long time, requires meticulous planning, and a lot of documentation. That’s one of the reasons it doesn’t happen very often, and when it is done it isn’t done lightly.

In all likelihood, the Library made this decision as much as two years ago. Given how long this process can take, they would have had to start that far back for this to end here and today. The worst part is that for much of that time I wasn’t aware of what was going on.

And yet, the clues were there. In hindsight, I think the Library had been trying to compel me to leave on my own for quite a while. My job became increasingly intolerable, in one way or another. No matter what I did to change things, or to improve my work situation, nothing seemed to work. I was never good enough, I was never efficient enough, I was never thorough enough, or something. I was always falling short in some way. Improvement in one area never mattered as much as deficiencies in another.

You may be asking why I put up with such a toxic situation if it was so bad. That’s easy: my fear of the unknown, namely being without a job and of being unable to provide for my family, was greater than whatever fear I had of the administration at the Library.

I should have been more observant, and definitely more shrewd.

The process really got moving in the summer of 2015. By then, the Library most likely concluded that I was not going to leave unless I was forced to (and that is actually true). It was then that the performance related disciplinary process began, though at first I didn’t recognize it as such. It wasn’t until February of 2016, when I was given a written warning that I was in danger of receiving an unsatisfactory performance rating, that the true nature of my situation started to become clear.

It was also shortly after this that I was diagnosed with ADHD. That changed the whole situation, and put many things in a different light. Prior to that, I had been asking myself why I was having so much trouble, and why I always felt frantic and rushed. Now I had an answer, and with the root problem identified and addressed, I was confident that I could overcome it.

I was in constant contact with my professional guild (AFSCME 2910) about possible accommodations and help with legal issues. I changed my methods of therapy, and was put on a new set of medications. I implemented some workplace accommodations to help deal with the physical issues of ADHD. I frequently put in extra hours at work, in the hope of finding a pattern than would work for me. I was determined to sufficiently improve my work performance. By the summer things had quieted down. I thought I had found the right working pattern, and that things would start to improve.

The summer lull had given me in a false sense of security. In August I was given an assignment that proved to be exceedingly difficult, and I was given a very short time in which to prove myself. The task was indeed very complex, and had several facets to it. But it was not beyond the requirements of someone with my job title. Sadly, I was unable to adequately do the assignment. I thought I had, but I did not. Knowing what I do now, I don’t think there was any way I could have succeeded with that assignment, and the Library never seriously expected me to. The only possible outcomes were varying levels of failure.

I didn’t think my situation could get worse than this, because now I was quite sure that I would be receiving an unsatisfactory performance rating. But, in mid-September I was informed that I was not performing my job at the level expected of me, and that further disciplinary action would soon follow in addition to a likely unsatisfactory performance rating. I kept trying to improve, and working with my guild to find options

Nothing worked. In October I was informed that an adverse action was going to be filed against me, and that it would probably call for my removal. Even so, I kept trying to save the situation, if only because I had nothing left to lose. In November I received my long-overdue evaluation, which rated my job performance as unsatisfactory. I still kept trying. At this point I was hoping for a re-assignment or demotion, because I knew my current position was lost.

Finally, in early December, I was informed that I was going to be removed from my current position. Also, in the opinion of my superiors, given the severity of my unsatisfactory work, I was not being considered for re-assignment or demotion. I called on my guild one last time. I spent an entire day speaking with my representative, explaining everything I could in as much detail as I could manage. I also described, at length, exactly how my work is done, and how ADHD has created so many problems for me. My representative became crestfallen.

There is a fine line between being a quitter, and realizing that it is time to quit. On that day, I crossed that line.

I never allowed myself to seriously consider leaving the Library, because when I looked at the various issues in life that I need to juggle every day, the prospect of being without my federal job – or more accurately, the salary and benefits it provided – was too horrible to contemplate. But the facts were clear. The Library had exhaustive paperwork showing how that for the past three years my work performance had been steadily deteriorating. And for every argument my guild had for keeping me on board, my superiors were able to produce at least two additional arguments for why they shouldn’t. They didn’t know there was a medical condition involved until late in the game, but it wouldn’t have mattered if they had. Poor work, no matter what causes it, is still poor work.

A few nights later, in a fit of crushing despair, I finally accepted what ADHD had done to my mind: I was no longer capable of doing my job.

I considered ending my life. I’ve suffered from depression for most of my adult life, but I hadn’t been in a place that dark in over twenty years. But here I was, thinking about clocking out. I didn’t, obviously, but I still felt lost. The only career I have ever seriously pursued, or have any solid experience in, could now be closed off. I was faced with the very real possibility that I no longer had a career. I may have to go back to entry level work, or do wage based labor, to survive. For a man who is approaching fifty, has a medical rap sheet, a stay-at-home wife, and two young children to care for, this is a terrifying position to be in!

I still had one option. My guild recommended that I take involuntary retirement, based on a medical disability. It took some negotiating, but eventually a settlement was reached where I would be allowed to retire from the Library of Congress under those guidelines.

I was six weeks shy of my fiftieth birthday, so this was a very surreal experience. Most men my age are in the coasting phase of their career, and are getting ready to gather resources for retirement. Very few are actually entering it. Fewer still are entering it unprepared and against choice. But here I was, preparing to retire almost fifteen years earlier than I had ever expected.

I have applied to retire through the Federal Employee Retirement System (known as FERS). I have to be approved before I can start receiving annuity, and even if I quality, not all of my problems will be solved. More needs to be done.

So what am I doing?

Lisa and I are restructuring our family’s finances into something that can last long term. I’m trying to help Lisa find a job so that get her re-established in the work force. She is helping me look for a new career, or at least find a job that will help keep us afloat. We’ve both been looking over our various skill sets to see what, if anything, we can refresh or update by taking a class or online tutorial. We’re setting ourselves up with temporary employment agencies that may help get us through the upcoming drought. I’ve been contacting old colleagues from earlier chapters of my life to see what the professional landscape has become and where it might be going. I’m exploring some work paths that I had never seriously considered before, like home-based computer work, and freelance writing.

I’m trying to determine what I can or should do with the rest of my life.

I’m doing what anyone else in my position would do.

I’m doing what I have to do.