We left home at 1:30pm on Friday, July 10. Our destination for the night was Zanesville, Ohio. We figured this was as far as we could reasonably expect to go on half a day’s travel. In terms of travel conditions, this first leg of the trip was perhaps the worst, as there is no easy way to get through the Appalachian mountains. The biggest problem we had were patches of construction, where traffic was painfully slow. The second biggest problem we had was at the hotel that night: Michael refused to go to sleep! As a result, we didn’t get an early start the next day, which we had hoped to do. Oh well.

We left Zanesville around 10:00am, and started for the Dayton area, where we had two stops planned. The first was the historic Woodland Cemetery and Arboretium, where two members of my family are buried. This wasn’t exactly a cheerful stop, but it was one I felt compelled to make. 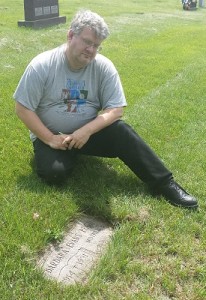 The first stop was my paternal grandmother, Barbara. I’ll be perfectly honest: I had mixed feelings about this. I didn’t know her well, and what I did know about her wasn’t all good. She was an easily disturbed woman who didn’t treat my father and uncle at all well, and her perspective on many things was… skewed. In fact, she was known to completely re-write history here and there. It would be pretty fair to say that she was a mess, and the effects of her behavior can still be felt in various ways. I’m trying, as best as I can, to put this in perspective, and leave it in the past where it belongs. She didn’t have much peace during life. Perhaps she has some now. 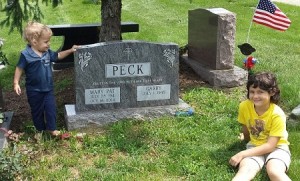 Our second stop was my aunt Mary Pat, who passed away last October. In contrast, I have many good memories of my aunt Mary Pat, though I’ll admit she was often hard to understand. For a while, when I was young, she nicknamed me Bunny Foo Foo, because I sang it for her once, and apparently it cracked her up. I hope she’s getting a good rest. 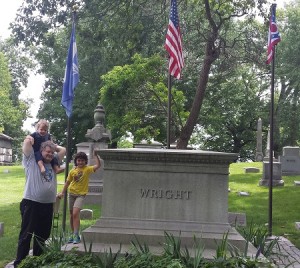 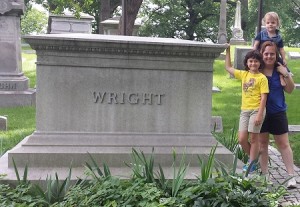 Our third stop wasn’t family, but historical: Orville and Wilbur Wright, inventors of the airplane. These two brothers had a bicycle shop in Dayton, and there they developed what would become the first functioning fixed-wing aircraft. History has told this story fairly well, so I won’t rehash it here. The two brothers and one of their sisters are buried in a large family plot in Woodland Cemetery, along with their parents and some other relations. 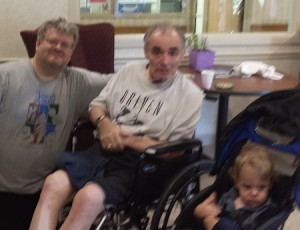 Our next stop was a nursing home in the nearby town of Englewood, where Mary Pat’s widower, Gary, lives. What can I say about Gary? He’s a funny guy. I remember him always being quick with jokes and witty remarks, some of which were entirely inappropriate. But he always managed to get a laugh. He’s not nearly as active as he used to be, thanks to two strokes during the last ten years. But one could say that while he’s a lot slower these days, the lights are still on upstairs. I’ll admit that it was difficult to see him in his debilitated state, but at the same time it was good to see that he was still good ole, fun Uncle Gary. In all seriousness he probably doesn’t have much time left, but I suspect he’ll keep those nurses laughing up until the end.

As well he should. 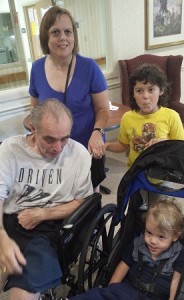 After visiting Gary, we had a leisurely lunch before continuing our journey. Apparently I was looking pretty glum, because at one point during lunch Lisa asked me what was wrong. I confessed to having been “crying on the inside.” A lot of emotions were running about that day.

At any rate, we left Englewood around 3:00pm, and continued. All in all, the traveling through the rest of Ohio and Indiana was without incident. The last hour, in the Chicago area, however, was quite an adventure. I came to the conclusion that speed limits are viewed as polite suggestions in Chicago, and aren’t taken seriously as laws. At one point I was (out of necessity) doing 70 in a 55 zone, and someone whipped past me on the left as if I was standing still! According to Lisa’s uncle, that’s a pretty common occurrence in the Windy City.

We arrived at Lisa’s aunt and uncle’s house in Crystal Lake around 10:00pm EST. (We had to change our clocks to Central Time.)

And no, this isn’t the same Crystal Lake where an undead psychopath in a hockey mask goes around with a machete.

Next: Get your motor running