For the return trip we tried to schedule things better, and not try to go quite so far in one day. Our target for the day was at the theoretical half-way point. The last time we drove this route the weather was ugly. Sadly, that was the case again this time. There was heavy rain, high wind, and overcast skies almost the entire way. There was one stretch, from upper Alabama to roughly the Tennessee state line, where the sun was able to make a very welcome appearance. As before, the stretch through Mississippi and Alabama was mind numbing.

Our target was Athens, Tennessee. That town is, almost to the mile, half-way between Hammond and our home. If time permitted, this would have been a nice town to explore. It has some nice historical sites, and good examples of Americana architecture. We filed these as possible ideas for a future trip, because we are likely to travel this route again.

It took over nine hours to get from Hammond to Athens, which wasn’t bad, but still longer than we had hoped. I suspect the weather, heavy traffic around Birmingham, and a lot of construction near Chattanooga contributed to the delay.

We also discovered that when you rent a hotel room, you get what you pay for. We saved a little money and went with a less-expensive hotel chain. Our room was acceptable, with firm beds and a bath that did what they were supposed to do. But, the building wasn’t in the best of shape, and there were signs of water damage. Even so, after the long drive, we were too tired to care.

Well, most of us were. Michael refused to settle down to sleep, and kept turning on the lights. He also tried turning on the television and clock radio. Needless to say, this was not appreciated by the rest of us. But even after being scolded multiple times, Michael would not stop.

However, I had what might be called a revelation. After turning off the lights for the umpteenth time, I soon saw Michael’s silhouette rise from his bed and make a bee-line for the light switch. I watched in the dark, ready to scold him the instant he turned on the light. But I didn’t, and here’s why. For a split-second after hitting the switch, I caught a glimpse of his face. He looked upset, stressed and afraid. When the light came on, his face quickly returned to normal.

At this point I need to include some exposition. Michael has agenesis of the corpus callosum. This could explain his difficulty with language, and hyper-sensitivity to touch. We still aren’t sure of the severity of his case, but regardless, his mind doesn’t work exactly the same as ours.

Michael has never been a good hotel guest. Whenever we travel, and we know we’ll be staying at a hotel, we expect Michael to be difficult. People with ACC often have difficulty in strange places, some more so than others. Michael generally isn’t afraid of the dark, at least not at home. But we weren’t at home.

Consider that Michael was in a strange, new place that he had never seen before, with few or no familiar points of reference. He hadn’t had enough time to catalog his surroundings, which from his perspective, was unrecognizable. When the lights went out, those few things he had been able to process were no longer visible. I think that’s when his imagination starts running, and fills the dark space with all matter of new and confusing stuff. I later did some reading on this, and my guess has support. There have been cases of ACC patients needing constant audio, visual, and sometimes olfactory input. If their input streams are not being filled by external stimuli, their brain starts to create artificial input.

We left one of the small lights running as a night light. Michael still kept turning on the other lights, after which one of us would turn them off. This game continued for a while until eventually, in the dim light, Michael succumbed to fatigue and fell asleep. We don’t know if the night light helped or not.

We had hoped that the second half of the trip would be easier, given that it is collectively downhill. Actually it did go easier in most ways. Traffic was bad in certain areas, but that was the worst of it.

The real problem this day was, apparently, me. Lisa said that for the entire day I had a rather scary glaze over my face, and just didn’t look right. I also had to make several very sudden and urgent bathroom stops over the course of the day. We got home around 6:30pm.

I turns out that my blood sugar had been dangerously high that day, with numbers that are usually used to describe car payments. Stress from the driving could account for some of it, as could the starch-heavy food that travelers are often forced to live on. It’s even possible that my slow metabolism was still processing the red beans and rice from two days earlier. Whatever the case, those blood tests were shocking, and these are things that a type-2 diabetic can not ignore. I started planning some diet changes that very night.

This brought home the fact that 2017, and the drastic life changes it was going to bring, had begun.

The caracal had gone to sleep. We were home. 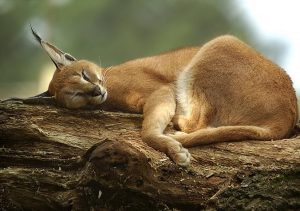