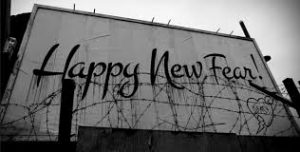 I’ve said before that New Year’s Day has never been one of my favorite holidays. This year was especially rough. It’s not because I was sorry to see 2016 end. On the contrary, I thought 2016 was a horrible year! During that year we had seen, on the international scene, some of the worst examples of human behavior since World War II. The economy was a roller coaster, and don’t get me started on that train wreck of a presidential election! The loss of so many beloved celebrities and cultural icons just added insult to injury. My career problems are a story unto themselves. Yes, 2016 sucked like a shop vac!

But I did not agree with all of the people who were saying how glad they would be when 2016 ends. The end of 2016 would make the beginning of 2017, and that filled me with dread. All indications suggested that 2017 would be far worse than 2016, in just about every way imaginable. And I’m not just referring to the change of administration. (Though that is an important part of it.)

With my job, perhaps my career, being in what could best be described as free-fall, I expected 2017 to be filled with struggle. All of those difficulties that Lisa, the kids and I were about the face were scheduled to start in 2017! In light of that, you can probably understand why I was not looking forward to the inevitable change of the calendar.

Recall the ironic curse “May you live in interesting times.”

We already live in interesting times, and 2017 looked like it was going to be more interesting than anyone dared to imagine. Sadly, some of the fears that I and others had about the upcoming year are playing out pretty much as badly as expected. On a more personal level, some of the things I dreaded have turned out better than expected, but still not altogether well. Regarding the remaining concerns on my personal docket, it’s still too early to call.

I certainly wasn’t looking forward to our family trip coming to an end. If I could have stretched things a bit further, I would have. But, time was marching on, and our sojourn to the Pelican State was coming to an end.